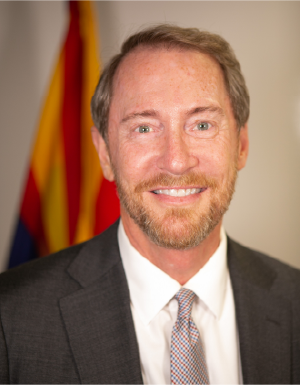 Tom Simplot has been in leadership positions in the private sector and in local, state, and federal levels of government.

Governor Doug Ducey appointed Mr. Simplot as Director of the Arizona Department of Housing in May 2021. In his current role, Tom is responsible for ensuring affordable housing is available for all Arizonans. He oversees programs established to create, preserve, and invest in affordable housing statewide. During Director Simplot's tenure, the Department has increased the number of new affordable housing units by implementing new financing resources, moved permanently to a virtual workplace, eliminated duplicative regulatory mechanisms, and improved transparency and communications with stakeholders.

Prior to his role with ADOH, Simplot served as senior deputy chairman of the National Endowment for the Arts in Washington, DC.  He was also a longtime member of the Phoenix City Council and served as president and CEO of the Arizona Multihousing Association, a statewide trade association for the apartment industry in Arizona.

While on the Phoenix City Council, Simplot focused on housing, arts, and economic development, and led the effort to establish the first new-build permanent supportive housing apartment community in the City of Phoenix.

Simplot was a resident of Arizona for 35 years prior to moving to Washington and was very active in the community, serving on the boards of the Valley of the Sun United Way, Valle del Sol, Arizona Chamber of Commerce & Industry, and Phoenix Theatre.  He also served as president of the Maricopa County Board of Health and the Maricopa County Industrial Development Authority. Simplot is a graduate of Arizona State University and the University of Iowa College of Law, and is a licensed attorney.