An Eye Towards Washington

A new President and Congress will be setting the agenda nationally for housing efforts come January 2017, with both the Executive and Legislative branches being controlled by Republicans. The Republican platform, as it relates to housing policy includes strong support of for homeownership, reducing the federal government’s role in housing finance, instead focusing on the Federal Housing Administration’s single family mortgage insurance on low and moderate income families. There will potentially be a drive towards reforming anti-poverty programs, limiting fair housing and fair lending regulations, and abolishing the Consumer Financial Protection Bureau. In the meantime, Congress came back the week of November 14th for the start of their “lame duck” session and work is expected to continue to build up S. 2962, the Affordable Housing Credit Improvement Act of 2016.

Congress passed a stopgap funding bill in the late hours of December 9 which keeps the federal government funded through April 28, 2017. The Continuing Resolution (CR) funds most federal programs at FY 2016 levels, and adheres as a whole to the $1.07 trillion spending ceiling allowed for FY 2017 in the two-year budget agreement. There was an across-the-board cut of 0.19 percent to funding levels for defense and non-defense programs in order to stay within the FY 2017 spending cap. Congress now has until April 28 to either pass final FY 2017 spending bills or a full-year CR to keep the federal government operating to the end of FY 2017 on September 30. 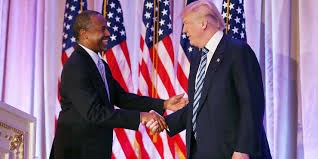 U.S. President-elect Donald Trump has nominated Ben Carson, a retired neurosurgeon who also made a bid for the Republican presidential nomination, to oversee the federal Department of Housing and Urban Development.  Dr. Carson will still need to go through the Senate confirmation process after President-elect Trump is sworn in, January of 2017.