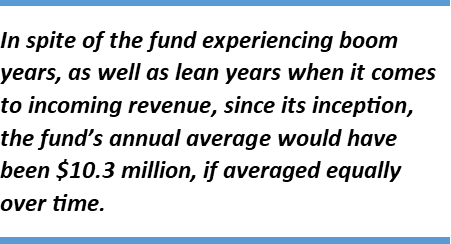 The Arizona Department of Housing was very pleased that the Arizona State Legislature passed a budget, signed into law by Governor Doug Ducey, providing an additional $15 million in State General Fund revenues to be deposited into Arizona’s Housing Trust Fund (HTF) in FY2020, which began July 1. Since its first deposit, three decades ago, the fund, which is authorized at A.R.S. § 41-3955, has had over $318 million available to invest in housing. In spite of the fund experiencing boom years, as well as lean years when it comes to incoming revenue, since its inception, the fund’s annual average would have been $10.3 million, if averaged equally over time.

The Arizona HTF provides the Department with its most flexible source of funding, providing match and leverage resources needed to access and utilize federal housing funds. This resource may be utilized for housing development, as well as housing assistance programs for which no federal resources exist, such as funding for homeless shelters, transitional housing, eviction prevention, rapid rehousing, and other innovative activities.

The Department’s current Director, Carol Ditmore, managed the Housing Trust Fund when she first joined the State in 1995, and probably has more knowledge of the fund’s history and its uses than any one. Director Ditmore stated, “I can say, without a doubt, the HTF has been one of the most important resources available to the Department. It has not been our largest resource, but it has been one of the most useful in addressing critical needs.”

The Department has been concerned about some external references to past HTF fund balances that only focus on the amount of funds made available to the fund on an annual basis coming from the State’s Unclaimed Property Fund, capped under Arizona law at $2.5 million a year. It is important to note that other resources are deposited into the fund as well. For the sake of transparency the Department provides a more in depth look at revenues deposited in to the fund below. 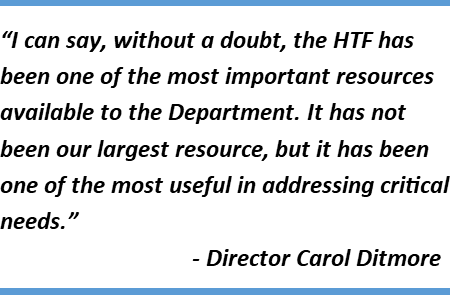 The Arizona Housing Trust Fund first began receiving deposits from the State’s Unclaimed Property Fund 30 years ago. In 1989, its first deposit of $1.5 million was the result of legislation that directed the deposit of 33 percent of the state’s unclaimed property collections into the fund. The HTF operated for several years under that formula, then in the late 1990’s the legislature amended the statute to increase the fund to receive 55 percent of unclaimed property.

Sweeps to the Fund

One issue that most HTF advocates are unaware of is that the fund has received a number of legislated sweeps over the years, all told, losing $57 million to the State’s General Fund through those transfers.

Not long after the HTF’s allocation increased to 55 percent of unclaimed property, the state’s economic growth resulted in the Unclaimed Property Fund seeing significant increases, which in turn significantly increased the dollar amount going into the HTF, topping out at $40 million in 2007. In the early 2000’s and then again, during the early years of the Great Recession, the Legislature made sweeps to the HTF, as it did to other State resources, in order to balance the budget when tax revenues were waning. Because of this risk, the Department was glad to see the Governor prioritize the State’s Rainy Day Fund in the latest budget, since a healthy Rainy Day Fund helps alleviate the potential for future sweeps to the Department’s resources.

As the Unclaimed Property Fund increased, the State Legislature took a fresh look at that resource and determined it made sense to retain the bulk of those funds for General Fund use in future years. As a result and as mentioned previously, in 2012 the HTF’s annual allotment of Unclaimed Property Funds was set at $2.5 million, through a statutory change, after a reduction to $10.5 million in 2010 and 2011.

Besides the annual deposit of unclaimed property into the fund, the HTF has received income from interest generated by the fund, as well as repayments on loans and other cash outlays returned to the fund. Over time, these additional deposits have provided an additional $32 million.

In 2017, the Arizona Industrial Development Authority (AzIDA) began transferring its single-family mortgage program’s year-end fee balance to the HTF, as required in the legislation that consolidated the bonding programs of the former Arizona Housing Finance Authority into the newly established AzIDA. In a few short years, the HTF has received $20 million from this resource. “The Department looks forward to annual, ongoing deposits from the AzIDA’s HOME Plus Mortgage Program,” stated Director Ditmore. “This fee income is one of the key income streams the HTF will rely on in years to come.  For this reason, the Department will continue to devote time and effort in promoting the AzIDA’s mortgage program, and will be looking for ways to partner with the program to generate more fees that will in turn be deposited back into the HTF.”

The Department is grateful for the legion of individuals and organizations who worked tirelessly over the past few months to stress the importance of this resource to Arizona’s affordable housing industry. As with all of its resources, the Department continues in its dedication to utilizing the fund to its greatest potential.