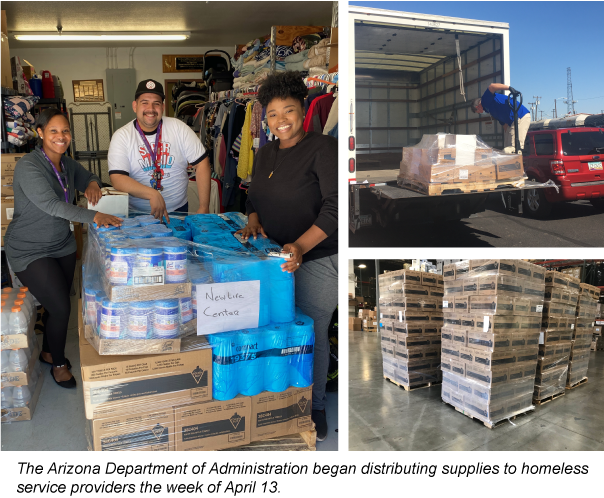 Governor Ducey on March 30 announced $5 million in funding made available through the COVID-19 Crisis Contingency Fund will go toward assisting homeless service providers in the prevention and slowing of COVID-19. The $5 million is part of an initial $6.7 million in funding Governor Ducey announced that will support vulnerable Arizonans by providing funds to Arizona food banks, nutrition programs and programs that serve the homeless.

The Arizona Department of Housing is administering the $5 million in new funding made available to support 79 homeless service providers in Arizona who are working to protect homeless individuals and families in this time of crisis. The Department will distribute over $2 million in supplies, as well as nearly $3 million in grant funding.

The Department reached out to over 100 homeless service providers around the state through the local Continuum of Care networks and found that while almost two dozen providers indicated they had no need for additional resources at this time, 79 of those contacted were relieved that emergency funding was being considered to support their mission to aid homeless populations by providing shelter, meals, and other basic necessities, with the ultimate goal to move people back into housing.

Of the $5 million in funds that will support homeless operations, over $2 million in supplies, from toilet paper to hand sanitizer, soap and other needs, is being purchased in bulk by the Arizona Department of Administration and delivered to the providers. Grant funds of nearly $3 million are expected to cover two months of operating costs due to increased expenses incurred this spring, while the homeless provider community addresses COVID-19 related issues providing for additional staffing and operational costs, motel vouchers, and supportive equipment such as tents, hand washing and shower stations, and portable toilets.

The Arizona Department of Housing is pleased that the State is able to help our homeless service provider partners with additional resources during this crisis. The Department is also looking for opportunities to arrange for additional federal or state support to assist the homeless provider community, working with the Arizona Department of Economic Security, as well as counties and cities that will be receiving direct funding from the federal government in the coming months.