Arizona Department of Housing focuses on

and efficient use of credits

In the past few years as Arizona’s population has boomed and demand for housing has rapidly increased, the Arizona Department of Housing has worked to refine its ability to impact production through its most powerful development tool, the federal Low-Income Housing Tax Credit Program (LIHTC).  It has accomplished this by focusing its attention on two areas associated with its 9% competitive credit program: promoting the construction of new units while increasing the number of units produced. It has moved the needle in these areas primarily through incentivizing new construction and efficient use of credits through the program’s Qualified Allocation Plan (QAP), which determines which applications that apply for credits may receive a reservation of credits in the competitive 9% round.

Federal LIHTC is available for the development of rental housing through two avenues: the one-time a year competitive 9% round, which utilizes a limited annual allocation that is based on the state’s population and other factors. The second way to access credits is to obtain authorization to utilize private activity bond financing, which then allows the project to qualify for 4% tax credits. Because of the connection with bond financing, access to 4% credits is available any time of the year, and the allocation of those credits is only limited by the state’s bond limits and its allowances in approving multifamily bond issuances. Authorization to access the State’s private activity bond allocation is overseen by the Arizona Finance Authority. 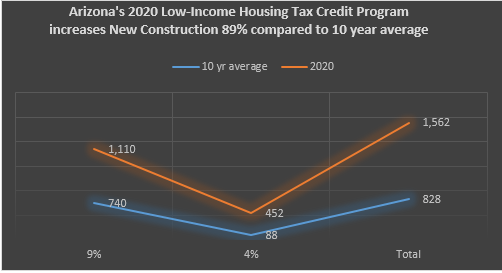 Why focus on new construction? At a time when there is a high demand for rental units in the market overall, it only makes sense to use the limited 9% tax credit resource to add new units or expand the number of units in existing properties. Preservation of existing affordable units can be accomplished through other tools, such as the non-competitive 4% credit and other means. We are also glad to note that the 4% credits have been increasingly used for new construction, in recent years, and expect that it will be even more so now that federal regulations have established a permanent 4% rate on those credits. 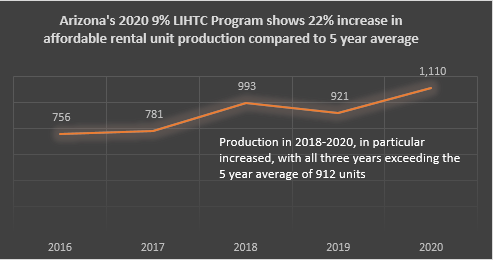 The QAP’s focus on efficiency for the competitive 9% round has been a two-pronged approach. First, the program focuses on making sure that projects maximize their resources in the production of actual housing units, not common or auxiliary space. The efficient use of space for dwelling units is incentivized through scoring. Since it takes the efficient use of space to score high enough to win, successful projects are always going to meet that initial threshold. To further incentivize the development of more units, a second efficiency approach is layered into the process through the use of tie-breaker points which gauges the most efficient use of the actual credits. In the past several years, the tie-breaker has been an important tool in increasing productivity. As a result, the program has been increasing the number of units it is able to finance year over year. When comparing the 9% program production of 1,110 in 2020 to the past five year average of 912, 2020 production increased by 22%.

Given the increasing high costs to develop projects, as well as the fact that the agency has not had deep subsidy tools such as were available during the Great Recession to stretch the use of available credits, the Department counts continued improvements in the efficient use of its resources as critical to affordable unit production.