The 2018 Arizona Housing Forum, with 504 attendees, is now a memory. Enjoying its highest attendance to date, the 2018 Forum was held August 22-24 at the JW Marriott Starr Pass in Tucson.

Early arrivers enjoyed the opportunity to network at an evening reception before the first day of the conference, which included a welcome by Tucson Mayor Jonathan Rothschild, a Drawing Inspiration address by Director Carol Ditmore, and luncheon keynote by Juliet Funt of WhiteSpace at Work. The last day of the conference concluded with a breakfast presentation by Aaron McDaniel on Inspiring a Multi-generational Workforce, which focused on working with the Millennial generation, and the 2018 Housing Hero Award Luncheon, where the Department honored this year’s awardees.

In between these featured events, Forum participants were able to choose between 15 different breakout sessions held over a day-and-a-half on a myriad of housing, community development, and general interest topics. The Department also held two important public listening sessions – one concerning Arizona’s 2019 Annual Update to its Consolidated Plan, and one concerning the 2019 Low-Income Housing Tax Credit Qualified Allocation Plan (QAP). 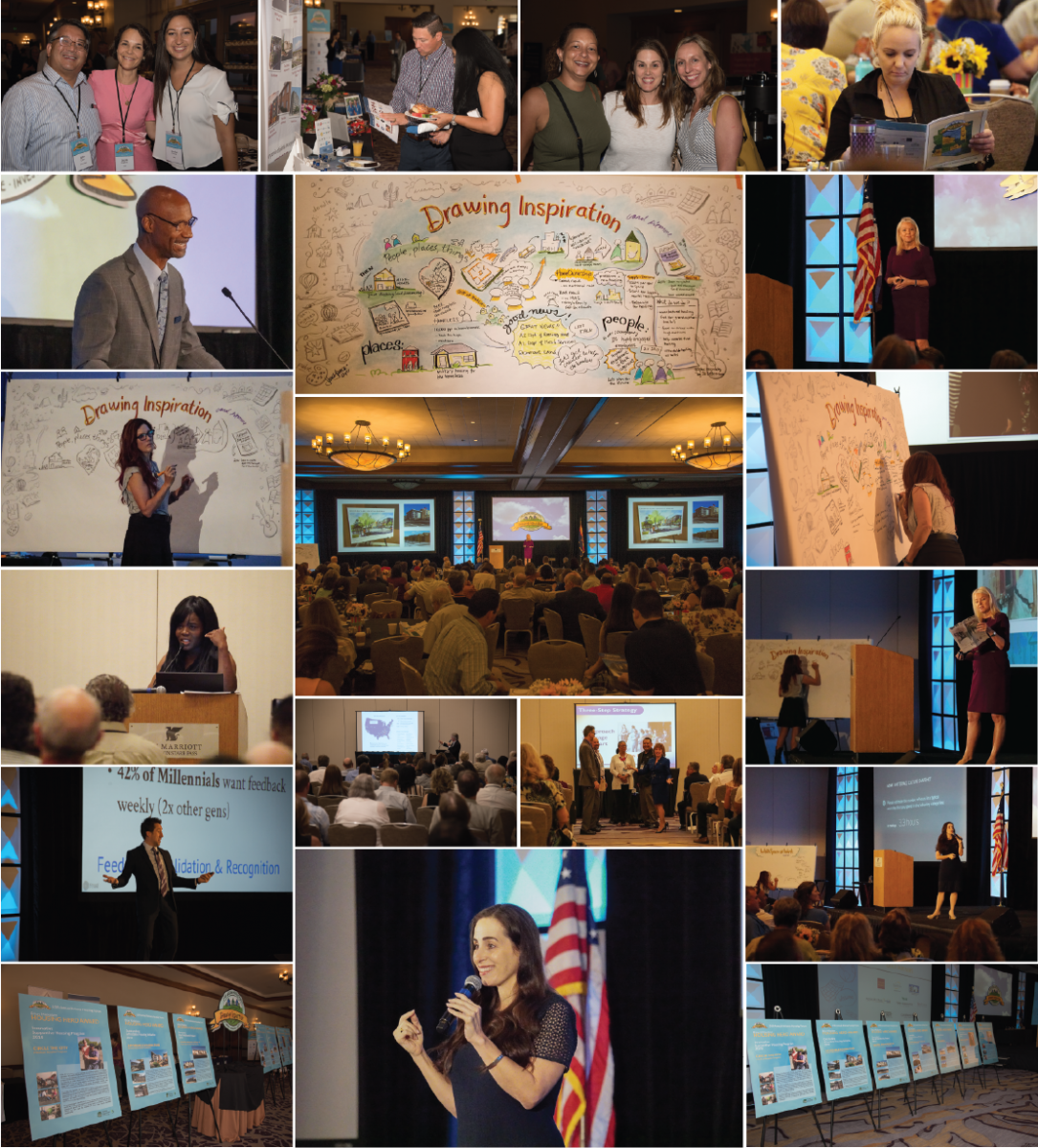 The Arizona Department of Housing announced the recipients of the 2018 Brian Mickelsen Housing Hero Awards at the 15th Annual Arizona Housing Forum. The Brian Mickelsen Housing Hero Awards recognize outstanding service by individuals and organizations for their commitment to numerous housing issues throughout the state.  Each year, nominees in seven different categories are selected based on their efforts to support affordable housing for moderate and low-income Arizona families.  The awards are named in honor of the outstanding public service exemplified by the late Brian Mickelsen, an original member of the Arizona Housing Finance Authority and former city manager for the Town of Cottonwood. 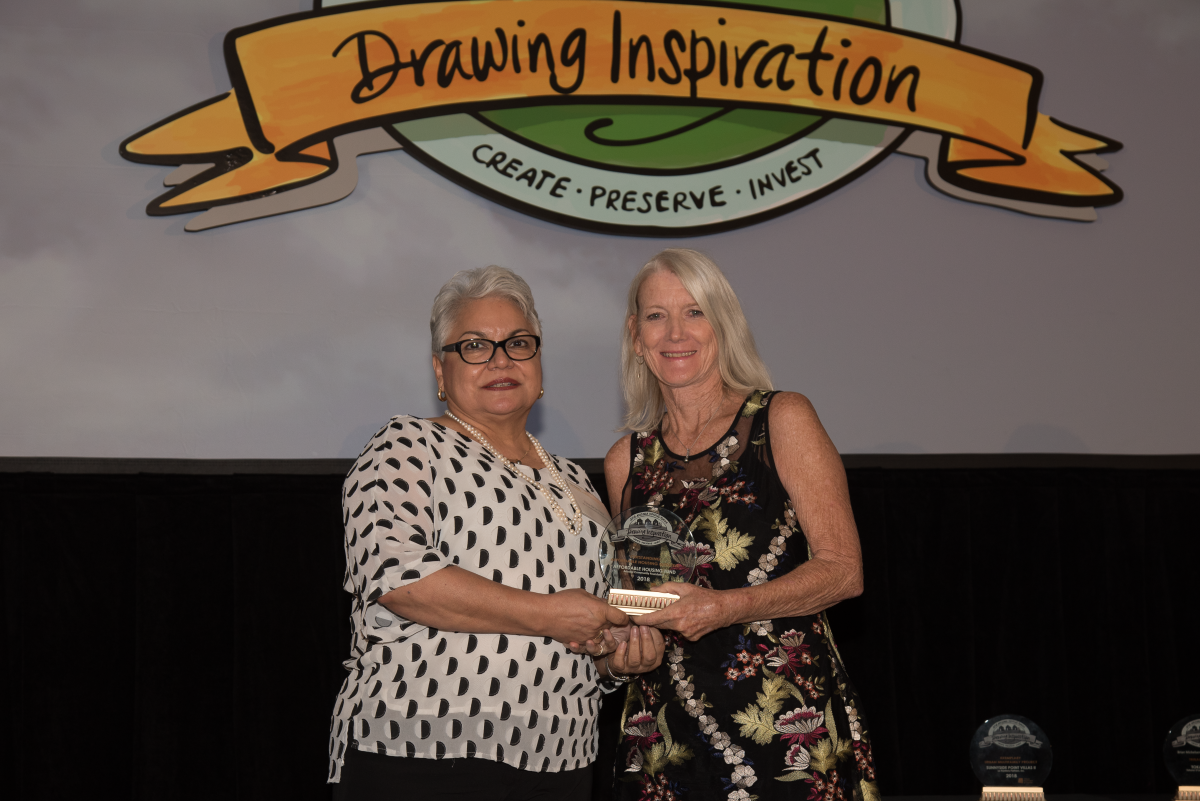 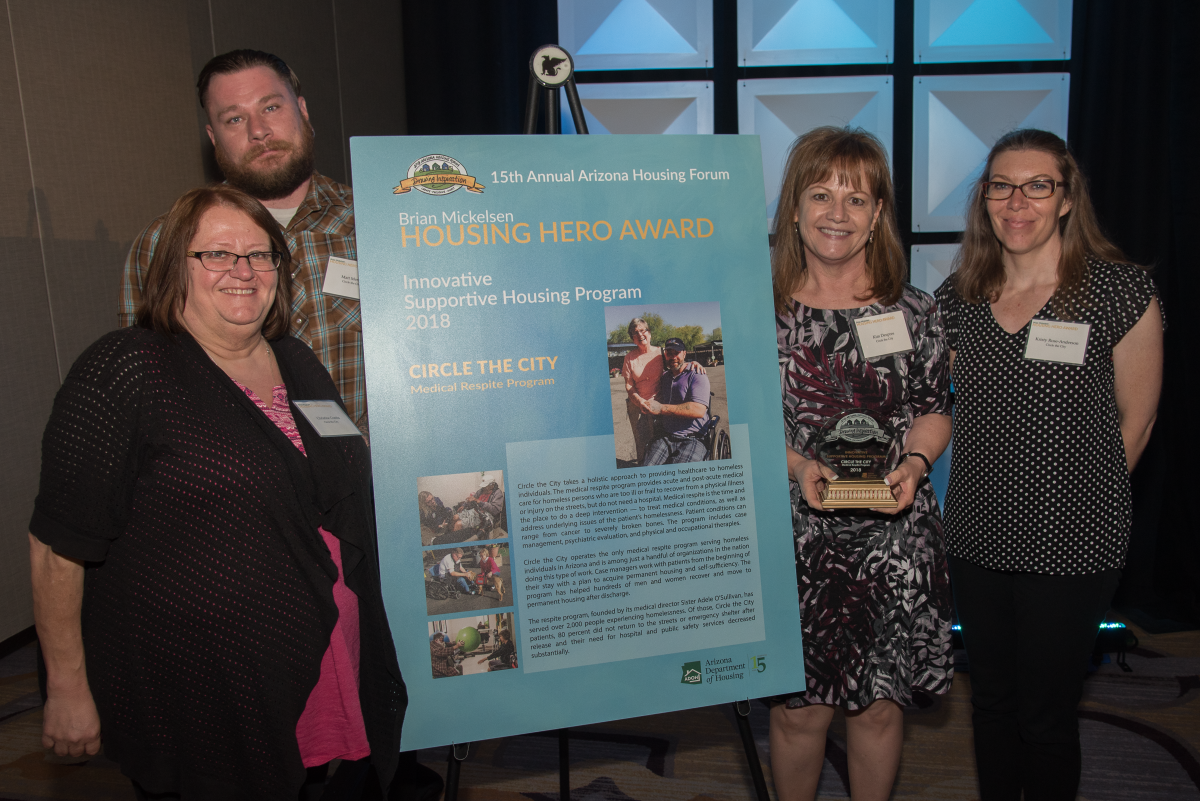 Circle the City was recognized with the Innovative Supportive Housing Program Award. This award recognizes creative programs and services that provide outstanding housing related support and resources to individuals.

Circle the City takes a holistic approach to providing healthcare to homeless individuals. The medical respite program provides acute and post-acute medical care for homeless persons who are too ill or frail to recover from a physical illness or injury on the streets, but do not need a hospital. Medical respite is the time and the place to do a deep intervention — to treat medical conditions, as well as address underlying issues of the patient’s homelessness. Patient conditions can range from cancer to severely broken bones. The program includes case management, psychiatric evaluation, and physical and occupational therapies.

TOKA Homes II is a 40-unit rental development consisting of 20 acquisition/rehabilitation units and 20 new construction units on the Tohono O’odham Reservation. TOKA Homes II, developed by Tohono O’odham Ki:Ki Association, has five, four and three bedroom units available for large families as well as one and two bedroom units for small families and individuals. The combination of the soft debt financing structure and the operational guarantees make TOKA Homes II stand out in terms operational capacity and long-term viability. 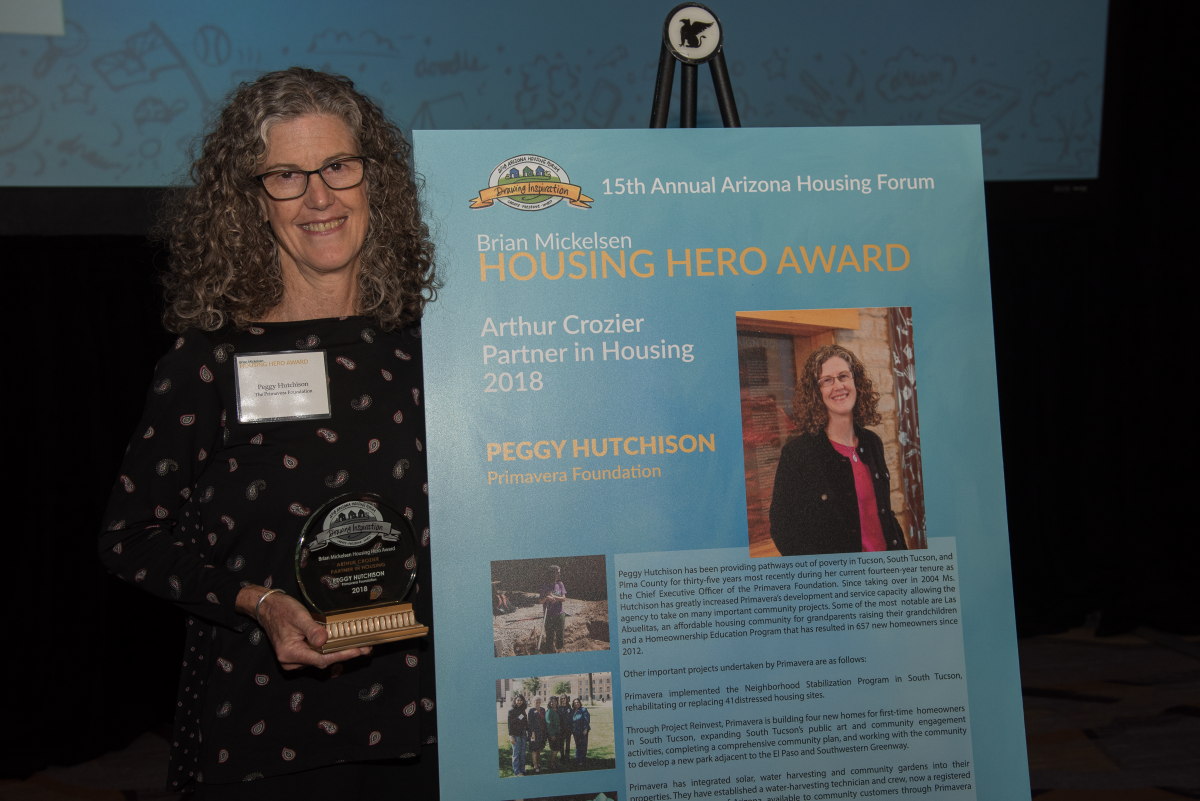 Peggy Hutchison, Primavera Foundation, was awarded with the Arthur Cozier Partner in Housing Award, which celebrates the single action or a lifetime of success of an individual committed to improving the lives of families and the health of communities through recognition that decent, affordable housing is basic to our social fabric.

Ms. Hutchison has been providing pathways out of poverty in Tucson, South Tucson, and Pima County for thirty-five years most recently during her current fourteen-year tenure as the Chief Executive Officer of the Primavera Foundation. Since taking over in 2004 Ms. Hutchison has greatly increased Primavera’s development and service capacity allowing the agency to take on many important community projects. Some of the most notable are Las Abuelitas, an affordable housing community for grandparents raising their grandchildren and a Homeownership Education Program that has resulted in 657 new homeowners since 2012. 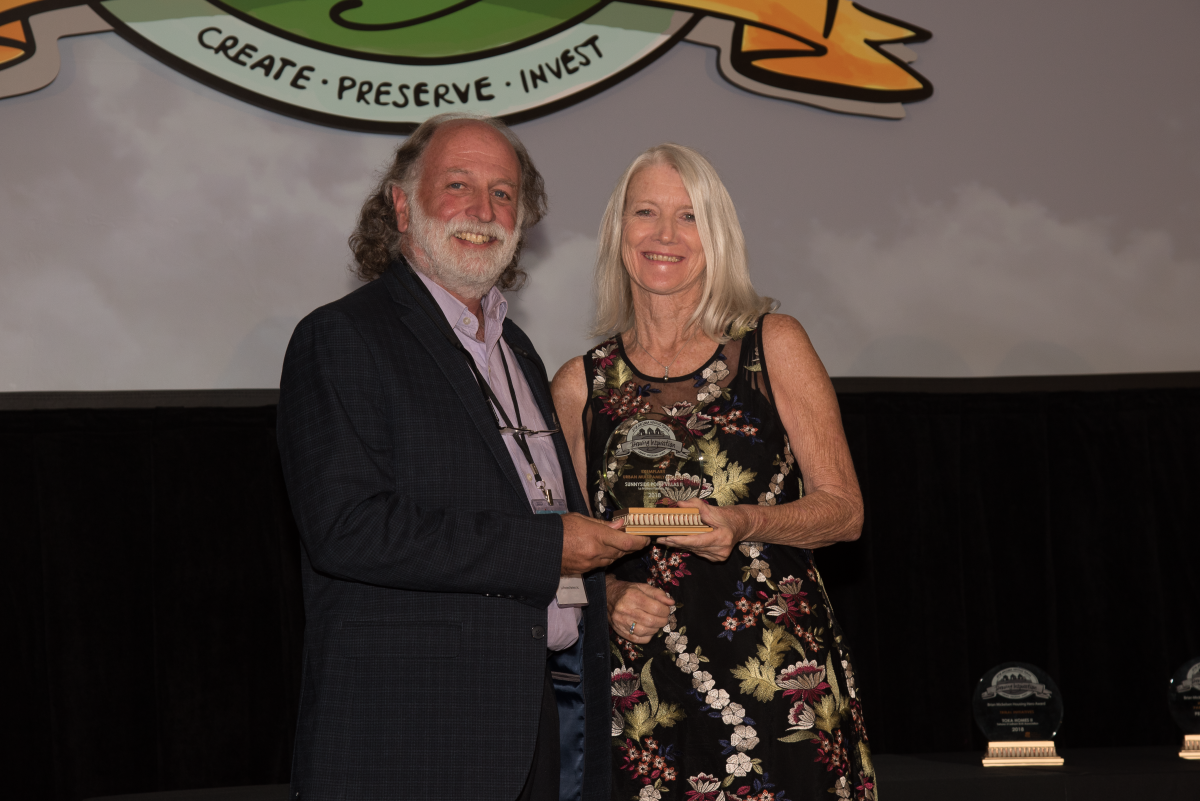 Sunnyside Pointe Villas II is a 92 unit newly constructed single-family detached rental community in Tucson developed by La Frontera Partners. Sunnyside Point is located in proximity to a grocery store, a senior center and a public library. The homes serve low-income persons earning between 40% and 60% of the area median income. Eighty percent of the units are reserved for persons age 55 and over. Twenty-five percent of the units are reserved for adults with developmental disabilities and autism. 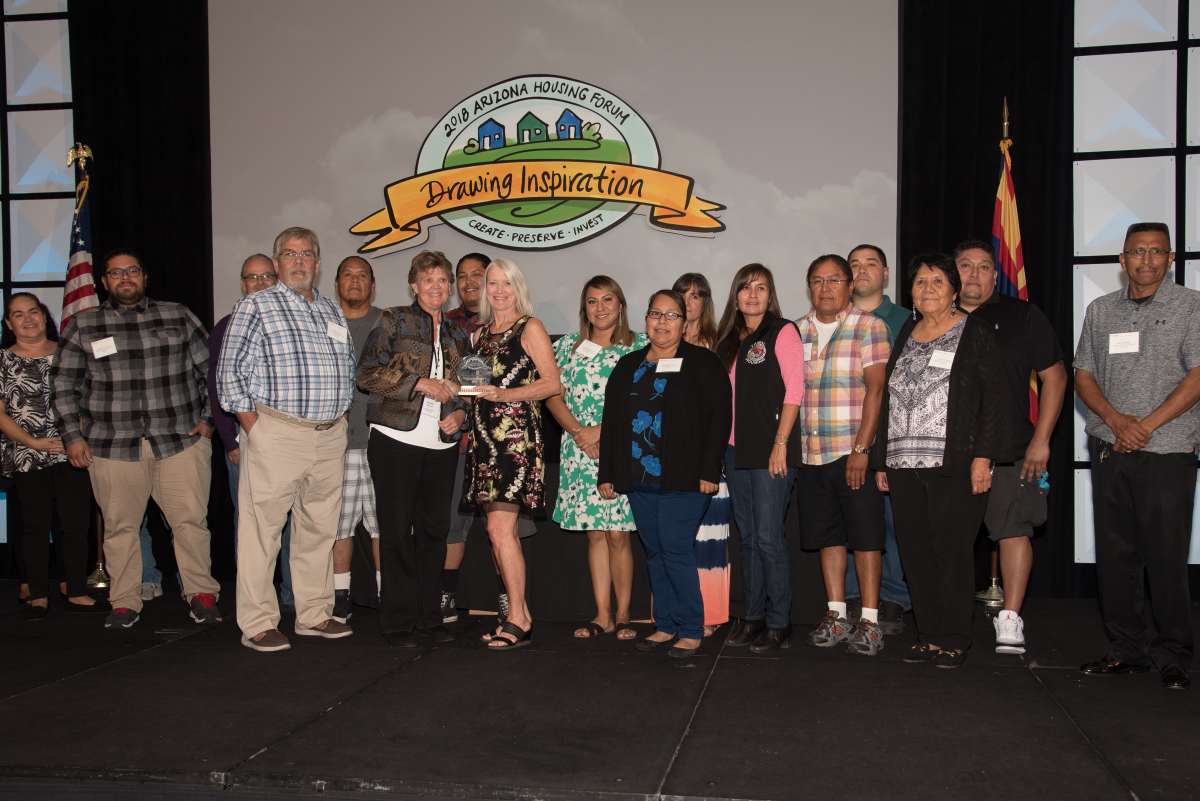 Yavapai-Apache Homes VI is a new 35-unit rental housing community in Camp Verde developed by the Yavapai-Apache Nation Tribal Housing. The project includes the construction of a public park, playground and a community building. The units consist of two, three and four bedroom homes affordable to households with 40, 50 and 60% of area median income. Each unit has a washer and dryer, water efficient fixtures, performance windows, and solar panels. 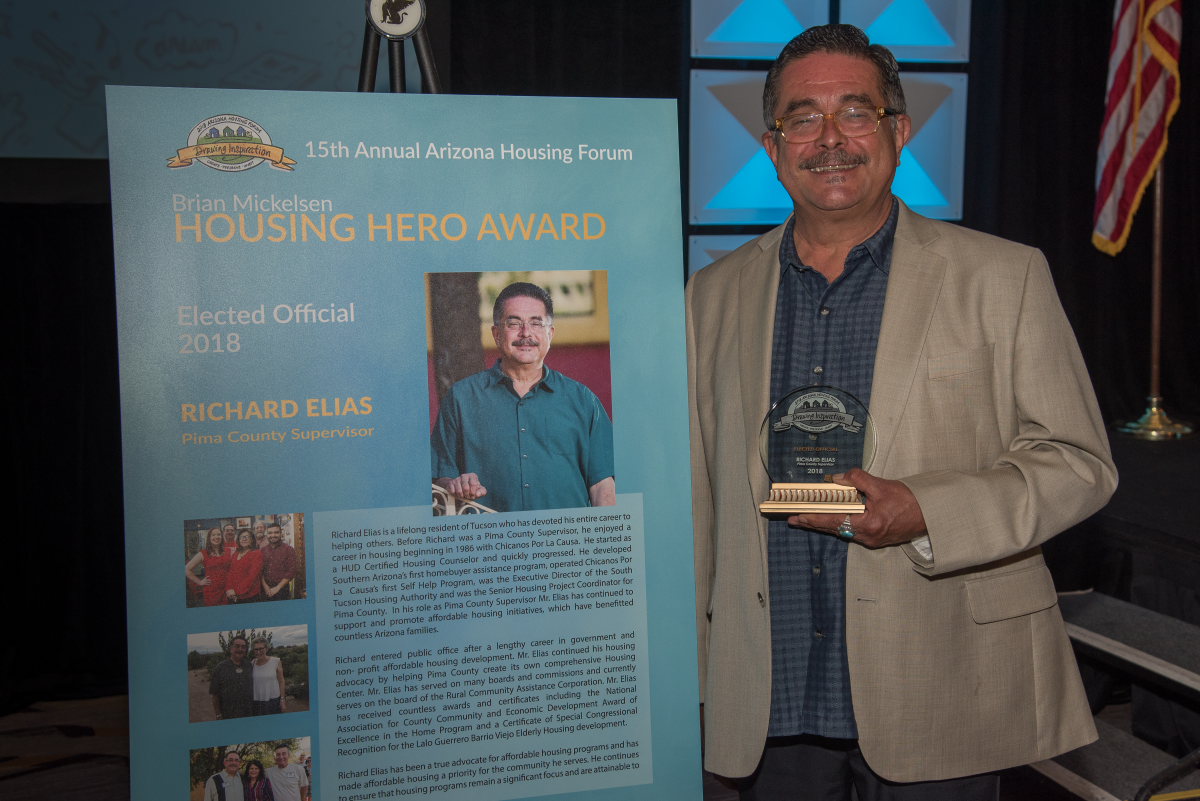 Finally, Richard Elias was presented with the 2018 Elected Official Award which recognizes an Arizona elected official who has demonstrated ongoing support for affordable housing projects and programs including housing for homeless, domestic violence, special needs and low income families and seniors.

Richard Elias is a lifelong resident of Tucson who has devoted his entire career to helping others. Before Richard was a Pima County Supervisor, he enjoyed a career in housing beginning in 1986 with Chicanos Por La Causa. He started as a HUD Certified Housing Counselor and quickly progressed. He developed Southern Arizona’s first homebuyer assistance program, operated Chicanos Por La Causa’s first Self Help Program, was the Executive Director of the South Tucson Housing Authority and was the Senior Housing Project Coordinator for Pima County. In his role as Pima County Supervisor Mr. Elias has continued to support and promote affordable housing initiatives, which have benefitted countless Arizona families.

The awards were presented at the JW Marriott Tucson Starr Pass in Tucson, Arizona at a luncheon during the 15th Annual Arizona Housing Forum.

We are already looking forward to the 2019 Arizona Housing Forum which will be held at The Scott, August 19-21, 2019, in Scottsdale, Arizona. Mark your calendars to join Arizona's most devoted housing and community development advocates at next year's exciting event.