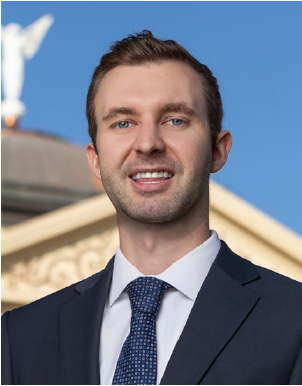 Mark Fitzgerald joined the Arizona Department of Housing ADOH) in January 2022 as the agency’s Legislative Liaison.

Prior to joining ADOH, Mark was a Legislative Assistant at Arizona Governmental Affairs (AGA).  While working at AGA, he assisted in communications and coordinated all legislative matters on behalf of the firm’s client base.

Mark’s other roles including serving as a Research Associate at the Arizona Chamber of Commerce where he assisted in policy briefings and international trade and development discussions to bring investment to Arizona.

In 2018, he was mentored by former United States Ambassador and Secretary of the Air Force, Barbara Barrett. While working for Ambassador Barrett, Mark advised her on policy matters including Education for Seapower - the Secretary of the Navy’s study of Naval and Marine Corps education and recruitment.

He also served as an intern for former Congresswoman and United States Senator, Martha McSally. Additionally, Mark has extensive experience working with the State of Arizona and Arizona legislature.

A California native, he received his Bachelor’s Degree from the University of Arizona where he majored in Public Policy and Management.  Mark is a member of the Phoenix Committee on Foreign Relations and the Sandra Day O’Connor Institute’s Emerging Leaders Network.